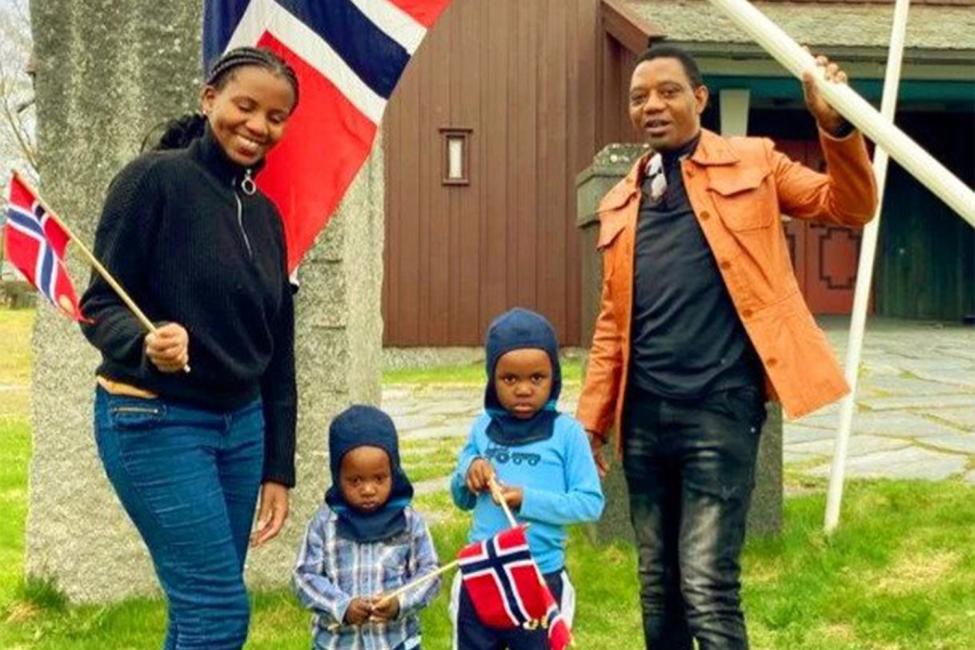 Oslo – “Everything is different here, very different from where we come from” says Esther Kanisa, a refugee from the Democratic Republic of Congo resettled in Ål, a small municipality in Viken county, Norway.

Esther and her husband Aimé fled DRC to Uganda and lived in the refugee settlement of Kyangwali in the Western part of Uganda. Esther and Aimé, were active in the camp - engaged in various activities including translation, health, mental health, data collection and community outreach in Kyangwali.

The two shared the great joy when they were accepted for resettlement by Norway and were eager to move to the Scandinavian country. In 2020, the government of Norway resettled 750 UN quota refugees from DRC and South Sudan living in Uganda. Before leaving for Norway, the family participated in a five day cultural orientation provided by trainers from IOM Norway, with logistical support from IOM Uganda.

“We did not know much of where we were going to” Esther recalls with a smile. “We have some friends who have resettled to the USA and from their stories, pictures, we thought Norway would be exactly the same.” The 26-year-old mother of two said the pre-departure cultural orientation (PDO) classes were an eye opener and gave a true depiction of their destination. “The images displayed in the classrooms, the videos and photos shown during the training and the articulated and engaged trainers showed us the difference between DRC/ Uganda and Norway, but also that it is different from other countries our friends were telling us about” she says.

The couple with their two children arrived in Norway in December 2020. Sharing their encounter with Norwegian society interspersed with the word “Banange”, a Luganda word meaning “Oh my Gosh”. Aimé reflected the family quickly adapted to the change, however, arriving during winter was challenging. “Luckily, we had just received cultural orientation and the trainer used time and efforts in explaining to us what snow is but also what life during winter season is like. In the beginning, clothing the kids to go out was not fun, but we got better, and actually enjoyed playing in the snow”. Esther agrees: “The information provided through IOM Norway's Culture Orientation Programme (NORCO) and the way IOM trained us was not only enjoyable, but instructive and served its purpose as a preparatory course. Frankly, it turned out to be of much help”.

It’s been six months since the family arrived in Norway - the municipality linked the family with volunteers who helped introduce the newly arrived family to the area, helped them participate in sports and social events, and through their own efforts – the couple and their children can communicate in “norsk” and are well on track in the Introduction Programme. Aimé is currently participating with work training at the local hospital and Esther works at the local cafe and restaurant in the small town centre where she practices her newly acquired language skills.

On the Facebook page of the municipality’s refugee integration unit, Esther is introduced as a new apprentice. “What a natural talent!” the Facebook post says and continues “On her first day she stood at the checkout counter, cooked and talked to lots of customers. Esther and her family (...) have learned Norwegian at record speed . This is a lady who will go far!”

Waving a Norwegian flag during our video call, the couple re-affirm their pride in being members of their new home municipality and Norwegian society. Esther tells us, “Today is 17th of May, (Norway’s national day) we feel accepted, we see it and live it daily. The people around us smile to us, greet us, and speak with us. From day one people asked where we come from and wanted to know a bit of our story and how we got here… normal curiosity. Our children are invited to play football, bike with other kids in the neighborhood. We are seen, welcomed and accepted.”

Subscribe to IOM newsletter to receive the latest news and stories about migration.